New
Mexico is the heart of Navajo country and a center for  Native
American Art including Navajo Rugs, Blankets and Weavings,   Native
American Pottery and Jewelry, Native American History and Historical
Sites and Ruins.

Pottery, rugs, blankets, clothing, and making baskets are just a portion of the great arts and crafts of the Southwest Native Americans.  Their art used symbols and signs to represent their ideas, beliefs, dreams, and visions.  Pottery was made for everyday use, including cooking, storage, bathing, and religious ceremonies.  They were painted and carved with designs that told a story and their history.

Experts assert prices for good quality Navajo weavings increased 700% from the mid 1960’s to mid 1980’s, and over the past 20 years, is increasing by 10 to 20% per year. Navajo rugs, blankets and weavings have been in existence for approximately 300 years. Unquestionable, Navajo weaving will undergo further change, and one possibility is a decline. The more optimistic view is that this Navajo art is on the threshold of widespread public acceptance for what it is, an art form. Today, Navajo rug production is high, the quality is excellent and rug prices continue to climb. It is our hope this pattern continues, and Americanization will not someday be the demise of Navajo weaving. In either event, buying a Navajo rug is a good investment. The clothing they wore depended on what they did.  Southwest Native Americans lived in a warm climate so they wore little clothing.  They would dress in flowers and paint with feather headdresses.  They also used clothing to signify their fighting skills.

Kachina dolls were carved out wood by the Zuni and Hopi tribes.  They clothed them in masks and costumes to look like the men who dressed
up as Kachina spirits.  They were given to children to teach
them to identify the different parts of Kachina dolls, and the parts
they play in tribal ceremonies.

The Navajo women wore earrings before marriage, and afterwards they attached them to bead necklaces until their own daughters are old enough to wear them.

Turquoise is mined by southwestern Native American tribes, and is the stone of happiness, health, and good fortune.  They use turquoise to make jewelry.  The southwestern tribes also collected good luck objects called fetishes.  They kept them in bowls painted with crushed turquoise.  The Navajo are known for silverwork, which they learned from the Mexicans.  The Navajo Indians developed silver working techniques used for jewelry, and made belts from sterling silver. 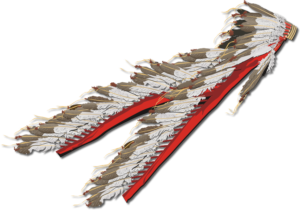 The Southwest Indians were the most skilled in making baskets.  They would decorate the baskets with colors and patterns.  They could be very symbolic like the Native American art they made.  The Hopi method of basket making has not changed for hundreds of years.

All of these items mentioned were ways for the Southwestern Native Americans to communicate their dreams, visions, and beliefs to each other or to people today.