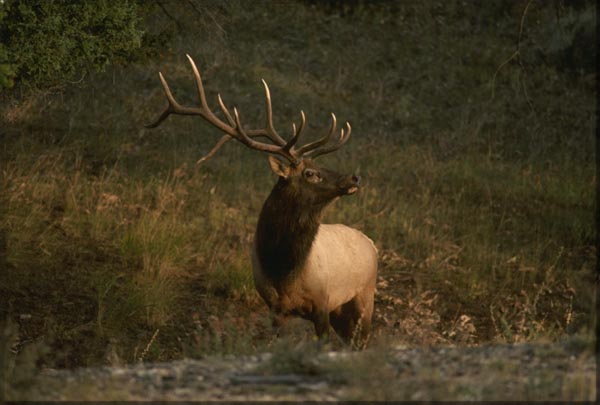 Good bow hunts are not far from Albuquerque – draw hunts for deer on the Sandia Game Refuge immediately to the east. Hunts for snow geese or ducks are usually good south of Albuquerque in the Rio Grande Valley at Bernardo and La Joya Waterfowl Management Areas.

The Early Teal Season hunting in mid-September at a part of the Bernardo WMA known as “The Quagmire.”

Northern hunting areas near Chama and the Jicarilla Apache Reservation have excellent hunting for deer and elk, but very little public land. Success rates for elk on The Lodge at Chama ranch (formerly Chama Land and Cattle Co.) historically are about 95 percent. Fees for five-day package hunts range from $7,100 to $10,000; (505) 756-2133. Big game hunts on the Jicarilla Apache Reservation run about 95 percent successful for cow elk at $500 and
bull elk at $5,000. Trophy mule deer hunts at $10,000 have about 85 percent success. Prices are for permits only; lodging, meals and required guide extra. Jicarilla Game and Fish, (505) 759-3255. Good elk and bear hunting on public land is available in the southern part of the region – the Jemez Mountains. Near Los Alamos, in the Valle Grande, is the Baca Land and Cattle Co., a private ranch. Elk hunt success rates have usually exceeded 80 percent. Hunts have been managed by Baca Outfitters in Abilene, Texas, (800) 456-6620, with past fees ranging from about $600 for cow elk to $11,000 for trophy bull elk. As of mid-February 2000, Congress set aside $101 million for purchase of the property, but authorization of this expenditure is pending. As a result, future activity at the property cannot be forecast.

In October combine duck hunting and
fishing for big trout on the Jicarilla Reservation. About 1,500 ranch tanks, or water holes, attract lots of ducks. Jump shoot ducks from one pond to the next early in the morning. Fish the reservation’s Stone Lake for 18- to 24-inch rainbows through the day, then return to the tanks for more waterfowl action in late afternoon. Modest fees. Jicarilla Game and Fish: (505) 759-3255.

This is pronghorn, bear and elk country – and mostly private land. Some of the best pronghorn hunting in the state is in a triangle roughly defined from Raton to Springer to Clayton. Recent success rates have been as high as 90 percent. Wild turkey hunts have been very good on private land and average on public land. For elk, public draw hunts on the Valle Vidal and hunts on private ranches are regularly excellent – truly class experiences with spectacular success ratios in magnificent surroundings. Valle Vidal and ranches listed below also offer excellent fishing opportunities.

The annual Canada goose draw hunt on the Las Vegas National Wildlife Refuge, just a few miles east of I-25 near Las Vegas. Hunt dates are in November and December. Pit blinds and two dozen decoys are provided. There are eight hunts, six blinds for each hunt and three persons per blind. The drawing is usually around mid-October, and applications should be submitted early. Contact the Las Vegas National Wildlife Refuge at Route 1, Box 399, Las Vegas, NM 87701; telephone (505) 425-3581.

Alternative Pick of the Region

Drop-camp elk hunting in the Pecos Wilderness. In this operation, the outfitter horse-packs the hunterwith his equipment into the wilderness, “drops” the hunter and equipment at a pre-arranged location, then reverses the procedure at the end of the hunt.
For services of a veteran Pecos outfitter like Huie Ley, price can be as low as $550 a person. Contact Tererro General Store and Stables, P.O. Box 12, Tererro, NM; telephone (505) 757-6193.

Northwest Waterfowl in the Navajo Lake/San Juan River area are of particular interest.
Ducks sometimes arrive a little late, depending on the weather in Colorado.
Hunting for both ducks and Canada geese can be good at authorized locations on the San Juan. With some scouting, flight patterns of ducks coming into the lake can also be identified. The Zuni Mountains, south of I-40 between Gallup and Grants, are expected to be fair for deer; this is a draw hunt. In the Mount Taylor area, elk are doing fairly well and a primitive-weapon hunt is worth investigating.

One of the state’s best deer areas, and a draw hunt, the Jicarilla Division of the Carson National Forest can be accessed by boat far up the San Juan Arm of Navajo Lake. Set up camp, hike inland or hunt near Navajo Lake. If time permits, troll at midday for trout or northern pike.

Southeast Major hunts are for pronghorn on the plains northeast of Roswell; desert mule deer in the Guadalupe, Capitan and Sacramento mountains and the Corona area; and elk in the Cloudcroft area. Even though deer numbers have been down in the Guadalupe Mountains, this is still considered by many to be the best area in the state for numbers of deer.

Look into a Barbary sheep hunting on the east, south and west fringes (not the elevations) of the Guadalupes (Big Game Unit 30). Open mid-January to mid-February, this is a tough hunt. Bring good boots and binoculars, plus a BLM Land Status map to identify public land.

Southwest The southwest region of the state is home to big elk in the Gila and Apache National Forests, javelina in the far southwest corner, whitewing and mourning doves, and three species of quail. Rocky Mountain bighorn sheep are southwest of Reserve; the rare Desert Bighorn sheep are in the Peloncillo Mountains in the bootheel of New Mexico. Persian ibex are on the Florida Mountains southeast of Deming and oryx on White Sands Missile Range.

Apply for Desert Bighorn (466 applicants for one license in 1999), and for trophy oryx (in 1999, odds varied for different hunts from about 1-in-3 to 1-in-10). A good third choice pick would be a well-scouted hunt ranging from Silver City to the bootheel for quail combined with a draw hunt for javelina (assuming quail seasons overlap the javelina hunt). Be sure to bring a 1:100,000 scale BLM Land Status map of your areas to identify public lands.