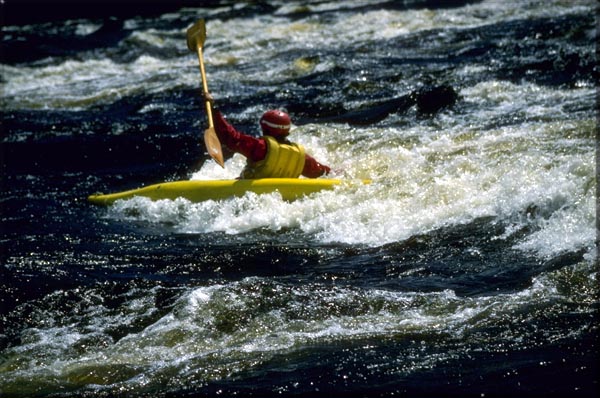 Not only are New Mexico’s infrequent rivers lifeblood to the arid state, but they’re also a source of wet ecstasy for intrepid Kayaking adventurers who regularly ply their waters in all manner of craft, from kayaks to canoes to hypalon rafts. Given that nearly all of the waterways rely on melting mountain snowpack for sustenance, it makes sense that the most exciting whitewater runs abound in the northern part of the state where most of the mountains are located. The unbridled Rio Grande west of Taos is the river of choice for experienced whitewater kayaking enthusiasts, while a tributary, the dam-controlled Rio Chama, is preferred by those seeking a gentler ride. Apart from these two premier runs, which are regulated by the Bureau of Land Management (BLM), an assortment of smaller rivers can be navigated during the short spring runoff season, which typically begins in April. Portions of other dam-controlled rivers, including the Rio Grande from south of Santa Fe to the Texas border, can be floated year-round when enough water is released.

Below Cochiti Dam, the Rio Grande cuts a wide swath through this region, which is dominated by the city of Albuquerque. Often so shallow it could be walked, the river still offers a number of enjoyable kayaking and canoe day trips. From just north of Bernalillo to the southern reaches of Albuquerque, boaters can choose from a number of flatwater stretches, which in the winter are frequented by Canada geese, ducks and an occasional great blue heron.

The abundance of tall mountains and north-central New Mexico’s location just south of the Colorado Rockies create cascades of whitewater every spring. From small tributaries to the “Mother” Rio Grande, the north-central waterways are a kayaking river
runner’s paradise.

The state’s premier kayaking whitewater run is 17 miles through the Rio Grande Gorge, a black basalt chasm that offers no easy exit from beginning to end. Stunning cliffs and plentiful bird life are often missed because the fast-moving water that tumbles over a number of steep drops demands kayakers’ near-constant attention. This section, known as the Taos Box, boasts rapids with names such as Dead Car, Pinball and Sunset.
Eleven commercial outfitters offer day trips. Above the Taos Box, from just north of the state line to Lee Trail, the Ute Mountain Run takes boaters through a broad lava-rock plain. Rapids are gentle and birdlife is abundant. Deer, elk and the occasional antelope are also sighted in this section. The downside to this scenic 24-mile stretch is the takeout, which requires boaters to carry out their craft up a steep, unimproved trail. Therefore, canoes and kayaks are recommended for the overnight trip. This section is closed from April 1 through May 31 in deference to the mating season of golden eagles and prairie falcons. A challenging but navigable five-mile stretch from Lee Trail to Chiflo Campground is followed by a short, boulder-choked section that is not recommended for boating. Below this section, boaters can carry their craft down a well-maintained
mile-long trail to the confluence of the Red River and the Rio Grande.
For eight miles, ending at John Dunn Bridge and the starting point for the Taos Box run, the river kicks up some small whitewater but mostly features the silence of wilderness, sightings of merganser ducks or an occasional deer. Below the Taos Box, a 10-mile stretch begins in the Orilla Verde Recreation Area, gaining momentum after the village of Pilar.
Below the village, a series of moderately challenging rapids runs alongside N.M. 68, providing entertainment to motorists and an easy escape for boaters. This five-mile section, known as the Racecourse, is the site of the annual Mother’s Day races sponsored by the Adobe Whitewater Club of New Mexico, an Albuquerque-based organization of private boaters.
The club’s address is P.O. Box 3835, Albuquerque, NM 87190-3835, and their website is www.adobeww.org.
Fourteen outfitters offer guided trips through this section, either as
a day or half-day outing.

From the end of the Racecourse at the Taos county line, the river remains tranquil until Otowi Bridge.
Although this slow-moving 25-mile stretch, which passes alongside apple orchards, is a pleasant float, a number of diversion dams are an unpleasant distraction. At Otowi Bridge, the Rio Grande begins a 24-mile journey to Cochiti Lake, where it backs up behind Cochiti Dam. This whitewater stretch takes kayakers through beautiful White Rock Canyon and its many side hikes, waterfalls and Indian ruins. A trail leads from the river to Bandelier National Monument. Some commercial companies offer guided overnight trips.

While the kayaking thrill-seekers get their adrenaline pumping on the Rio Grande, the Rio Chama uses its unparalleled beauty to attract boaters. This major tributary of the Rio Grande enters the state atop Cumbres Pass north of Chama. The first six miles plummet through a narrow gorge and are recommended for expert
kayakers only. By the time it reaches the town of Chama, the river
mellows, but a profusion of fences across it prevent boating enjoyment until just west of Tierra Amarilla. The ensuing 15 miles take boaters through a deep canyon thick with Ponderosa pines and numerous rapids, the most challenging known as Big Mama Chama. The run ends at El Vado Lake. The 33 miles that flow between El Vado and Abiquiu reservoirs make up the stretch of the Rio Chama that has become most popular and is in fact regulated by the Taos office of the BLM. Due to its popularity, a unique arrangement between the owners of Rio Chama water rights and
the BLM provides for scheduled releases from El Vado Dam during
seven
summer weekends to provide enough water for rafters. Permits are required to ply its waters and can be obtained by contacting the Taos BLM office at (505) 758-8851. This section was the first New Mexico river to receive the federal designation as a Wild and Scenic River. Ponderosa pines and firs line the banks at the launch site and the river gradually leaves them behind as it opens up to pastel-hued cliffs at the takeout. Hiking opportunities and rapids are plentiful but not intimidating, making this a wonderful canoe trip or family outing. Twelve outfitters offer guided trips, mostly overnight, through this stretch. Below Abiquiu Dam, the Rio Chama flows alongside farms and ranches, often slowed by diversion dams. Cottonwoods line this 25-mile stretch of slow-moving water until it joins up with the Rio Grande. In addition to these two main waterways, this region is peppered with a number of narrow creeks that brim with fast-moving snowmelt in the spring, offering experienced kayakers and canoeists an abundance of whitewater opportunities. For example, the Brazos River offers a nine-mile trip from the base of the sheer, granite Brazos Cliffs to the Chama River, taking boaters on a swift journey through pine-clad slopes. Continuous extreme whitewater marks a 15-mile stretch of the Rio Embudo that winds through a remote, heavily wooded gorge before it joins the Rio Grande. The Jemez River is obstructed by various manmade hazards such as fences and dams, which grow fewer as it approaches
the Rio Grande at Zia Pueblo.

In the springtime, the Sangre de Cristo Mountains replenish a number of rivers that flow from its eastern flanks onto the plains of northeastern New Mexico. The Pecos River typically carries the greatest volume during the spring runoff. From Cowles to the village of Pecos, the river drops steeply for 20 miles through magnificent conifer forests. Diversion dams require attention and possible portaging. Beginning at South San Ysidro, the river passes through a number of steep-walled sandstone canyons and alongside a collection of Spanish colonial villages. This 25-mile stretch, which ends at Villanueva State Park, has small rapids and is recommended
for canoes. From Villanueva State Park, the Pecos offers boaters a short season (May-June) through 19 miles of rollicking whitewater in a steep-walled canyon. This fast-moving stretch requires one difficult portage around a diversion dam.

To the north, during wet years, the Canadian River offers an action-packed whitewater run from just east of Springer to Conchas Reservoir. The 75-mile trip takes boaters through a deep sandstone canyon with historic ruins and soaring eagles.

From Eagle Nest Dam to Cimarron, the Cimarron River kicks up continuously challenging whitewater for 25 miles. The fast-moving mountain run passes alongside towering granite cliffs at Cimarron Canyon State Park. Below the village of Cimarron, the river calms down and occasionally holds enough water to carry boaters another 25 miles through rolling cattle country to the town of Springer.

During a wet spring, kayakers can navigate a 30-mile stretch of the Mora River, from just east of Watrous to the confluence of the Canadian River. This run begins lazily, gradually increasing in whitewater intensity, with boaters portaging some of the most difficult sections.

The San Juan River flows from beneath Navajo Dam, passing alongside Farmington and Shiprock on its way to Utah and its convergence with the Colorado River. From the dam to the town of Blanco, kayakers are treated to abundant waterfowl and beaver. This relaxing 17-mile stretch, which travels through Navajo Lake State Park, can be run any time of the year.
From Blanco to Shiprock, two diversion dams encourage portages for canoeists and kayakers, the preferred craft because of the obstacles. The 50-mile stretch is mostly pastoral with the option of visiting Salmon Ruins and Heritage Park east of Bloomfield. For 31 miles, from Shiprock to Four Corners, the river remains placid, taking boaters past sandstone bluffs and badlands.

The Animas River enters the state north of Farmington, joining the San Juan on the western edge of the city. This relaxing 25-mile stretch passes by sandstone cliffs and farmland and can be run most of the year.

By the time the Pecos River, the major waterway of this region, reaches the open plains, it has lost its intensity, often backed up into reservoirs behind dams. The City of Carlsbad, through which the river flows, has taken advantage of its oasis qualities and offers scenic boat tours. Paddleboats and bumper boats can be rented and a full-scale water park keeps locals and visitors entertained throughout the warmer months.

Beginning high in the Black Range of the Gila National Forest, the
Gila River cascades its way toward the Arizona border. A number of stretches are boatable in spring, starting with a seven-mile section from the visitor center of the Gila Cliff Dwellings National Monument to the confluence with the river’s east fork. The following 38 miles are replete with lush canyons, refreshing springs, wildlife and scores of rapids. Known as the Wilderness Run, this section demands focused attention because there are few calm spots. Side hikes are also plentiful. From Mogollon Creek to FS 809, many barbed-wire fences and irrigation diversions impede travel, but the next 18 miles, known as the Middle Box, provide a wild ride through a narrow, rocky canyon. The river slows for the remaining 20 miles to Virden and the birdlife increases. Side hikes feature Indian petroglyphs.
For more information on the Gila River, call (505) 536-9461.

The Rio Grande sustains farmland through this region, but a 20-mile stretch from Elephant Butte Dam to Caballo Lake is an enjoyable run for canoeists and beginning kayakers.