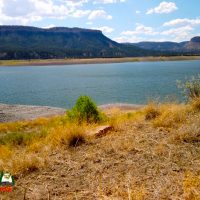 2,100-acre to 3,200-acre lake in a spectacular setting on the Chama River at an altitude of close to 7,000 feet. Maximum depth is about 170 feet when full. Boaters can camp out overlooking the lake and at a number of scenic primitive sites on both the north penninsula and another on the west side of the lake. Popular for mid season water sports after the water warms along the upper portions of the lake on both the east and west sides of the penninsula.

Hike the 5.5 mile trail along the Rio Chama from El Vado to Heron Lake where you can spot bald eagles and enjoy the river views. With all this water there’s lots of opportunity to fish for trout and salmon or head out on your boat. There’s even boat in camping (as well as beach camping), for those who want to stay out until the sun sinks behind the mountains.

Winter time is prime time here too; with ice fishing, snowshoeing and cross country skiing, there isn’t a season at El Vado you won’t enjoy.

The eastern shore of the lake is the El Vado Lake State Park, featuring over 100 camping and picnic sites, and two improved boat ramps. The lake is a destination for salmon and trout fishing, as well as for boating. Unlike nearby Heron Lake, boat speeds are not restricted. A 5.5-mile hiking trail runs to the north, crosses the Rio Chama Gorge via a pedestrian suspension bridge, and then connects to the Heron Lake State Park.

The stretch of the Chama River below El Vado Lake Dam has a long history of producing big fish. Back when El Vado Dam was completed in 1935, old timers will tell you that the fishing in the Chama River back then below the Dam was the stuff dreams are made of. It was routine to catch a big stringer full of big trout. Even the new lake behind the Dam produced 10-to-15 pound rainbow trout. In 1946, a 20.5-pound brown trout was caught in the Chama below El Vado Dam. That’s a state-record that still stands to this day.

That fishing is a thing of the past, but the Chama River below El Vado still remains one of the better spots to catch a big brown trout in New Mexico. The brown trout are now all wild fish, having established a naturally-reproducing population in the Chama. The state Game and Fish Department stocks this area liberally with catchable-size rainbow trout. Last year, they even stocked a bunch of Rio Grande cutthroat trout. One day, I was able to catch brown, rainbow and cutthroat trout the same day.

The best way to ensure that you will have an exceptional angling experience is to hire a seasoned, knowledgeable fishing guide. These experts can show you the best fishing spots and provide you with the perfect tackle and necessary equipment to make sure you have the fishing adventure of a lifetime.