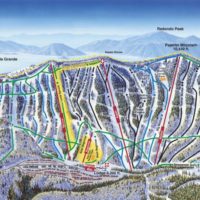 An excellent source of information is Deanna Morgan Kirby’s “Just Crazy to ski – a Fifty-Year History of Skiing at Los Alamos”, published by the Los Alamos Historical Society (2003).

The account below of the history of Los Alamos Ski Club was written by Paul Allison, and based on video interviews by Allison and Fretwell and on phone conversations with Allison of primarily Sawyers Hill persons in 85-86. Additional material obtained from newspapers, magazines, books, some interviews of persons involved with Pajarito development. It was begun in 1985, and then revised up to 1991. Further revision is needed to bring it fully up to date. Contributions are welcome.

The Los Alamos Ranch School (LARS) for boys was founded by Ashley Pond in 1917. Pond’s daughter Peggy married Fermor Church, one of the schoolmasters, and spent her honeymoon in 1924 in a cabin at Camp May a few yards from the present Mother chairlift that ascends Pajarito Mountain. Most likely skiing became popular at LARS in the thirties as it did elsewhere in the country at that time. The invention of the rope tow in 1932 by Mueller, a Swiss, made simple, cheap tows available to a good backyard mechanic, and the first skiing competition in the 1936 winter Olympics in Germany and the opening of Sun Valley with the first chairlift provided the inspiration to ski.

Every spring the LARS boys would haul supplies by horse and then by sledge to the Camp May cabin, where they would spend a week skiing and camping. A small slope was cleared near the cabin to practice turning and stopping, but descents from the top of the mountain were the main event.

By 1938 skiing was so popular that Hup Wallis, one of the schoolmasters, cleared a new area on Sawyers Hill, accessible by what was then a dirt road into the Valle Grande, once thought to be the largest volcano caldera in the world. Now they could ski every weekend, and part of the pleasure lay in being allowed to wear long pants, since “all other activities required the wearing of shorts”, according to then student Wilson Hurley. Thus skiing provided the warm winter alternative! The hill had to be climbed for each descent, but occasionally a truck took them further up the dirt road to a point from which a shorter route to the top could be taken.

The US army took over the school and its buildings in February of 1943 as a secret site to research the possibility of building the atomic bomb in a race against the Germans and perhaps the Japanese. The group of Americans and Europeans brought to Los Alamos for the project enjoyed the outdoors in the little time available outside their work, and many of them skied on Sawyers Hill in the winter of 43-44. A ski club was organized in November of 1943, and by the summer of 1944 there were work parties to improve the hill and talk of acquiring a tow. Three GIs, including now retired lab employee John Rogers, volunteered to design, build, and operate a tow for a year for $400. An organizational meeting was held in November of 1944 to “cut a path for the tow, in case we get one” and to raise the money. Rogers recalls getting a Chrysler engine from an Albuquerque junkyard and a rope from a defunct circus. These GIs had never seen a tow before, but on Sunday, 24 December, 1944, Sawyers Hill opened for business. Dues for the season were $7.50/person (equivalent to about $80 in 2000$), expensive considering the meager facilities. The circus rope wore badly on the small pulleys, requiring frequent splicing during the day, but it worked and the skiers were delighted. For most of them, Sawyers Hill was their first exposure to skiing, and it was a great place.

In the summer of 1945, the lab’s implosion bomb was tested in the desert near Alamogordo, and then two bombs were used to end the war with Japan. With the machine shops now somewhat idle during the uncertainty of what to do after the end of the war, one scientist submitted a design for new pulleys for the tow, so rumor has it. The new pulley was “designed to within an inch of its life” and was built in the lab’s main shops, and the tow operation the next winter was much better. By the winter of 46-47 the uncertainty of the lab’s future was diminished with the promise of permanent housing, and plans for a new beginners’ tow were announced. Ski club president Les Seeley toured over to Pajarito Mountain during the winter with other skiers and assessed the possibility of moving there but considered the obstacles too great.

The first Skiesta, a much-publicized event named after a popular movie of the day, was held on 29 February, 1948. There were races with prizes from merchants in Santa Fe and Albuquerque, a sound truck for music, fancy costumes, and a hotdog lunch with beans for 50¢. Skiesta is still held every year, but a live band has now replaced the sound truck. A lodge was built in the summer of 1948 by the lab’s construction company, Zia, for the skiers. A ski school was operated by Jean and Buzz Bainbridge, who charged $2/lesson. Bainbridge, who went on to a long career in the ski business which included development of Santa Fe Ski Basin, recalls that lessons were very popular because “the Los Alamos ski patrol, in their pedantic way, would stop awkward skiers and strongly suggest that they take lessons”. Sawyers Hill, with 370′ of vertical and two rope tows, had the best facilities in the state except for the newly opened T-bar at La Madera (now part of Sandia Peak) near Albuquerque. But ski facilities were being developed elsewhere, with Santa Fe opening in the fall of 1948 with a 1500′ rope tow.

In September of 1949, the fallout from Joe 1, the first Russian atomic bomb, was detected, and the news caused some panic in Washington. President Truman ordered a crash program to develop the much-discussed H-bomb, and the lab reverted to the wartime six-day work week. There was limited time for skiing, but the Santa Fe ski patrol was run by Los Alamos skiers for a few years. When the lab returned to a more normal schedule in the fall of 1952, Santa Fe had installed a chairlift and a T-bar in a high-altitude basin with a lot of snow. The old WPA-built tow at Santa Fe’s Hyde Park was donated to Los Alamos, where it was installed as the North Tow. However, snowfall had been sparse for the past several years, and in 56-57 the tows ran for only seven days. Dissatisfied skiers, who had wearied of “skiing on a few frozen blades of grass”, looked over the maps and made a trip by skis into Camp May in the spring of 1957. Finding considerable snow on Pajarito Mountain, Stretch Fretwell, Bill Jarmie, Dale Holm, Mal Wallis and others began promoting a move to the Club.

The Move to Pajarito Mountain

The obstacles to moving were still great, but increasing skier sophistication made Sawyers Hill look less attractive, in spite of thirteen years of development. Opposition to the move was surprisingly small, and different groups went to seek permission from the AEC to use the land, to promote the improvement of the jeep road to Camp May into a gravel road suitable for cars, to cut new slopes, and to move the tows. Many skiers worked through the summer weekends to prepare the beginnings of a ski area. After a five-year drought, the winter of 57-58 started early, and it was necessary to do a lot of the slope cutting and tow installation in the snow throughout the fall. The leased lab building used for a lodge had to be placed on a pile of logs in November instead of footings. As the snow melted underneath it during the season, the building had to be continually jacked up to maintain its level. On opening day, 23 November, two tows were in place with double the vertical drop of Sawyers Hill, and there was a beginners’ slope and a narrow trail from the upper tow. The record snowfall in the county to that date might well have tempted the skiers to stay at Sawyers’ Hill had it fallen the year before.

No single person was responsible for the development of either skiing facility, there being perhaps 20-50 individuals who made large contributions, but with the move to Pajarito a relatively new enthusiast, Bob Thorn, became president. He organized the development in an efficient way and was widely regarded as the prime mover in Pajarito’s development for over 30 years. Chainsaws replaced hand saws, and wide slopes were laid out. The next two years’ work was focused on slope development, and the North Tow from Sawyers Hill was brought over finally for the 59-60 season. “If you had arms of steel and sufficient disregard for pain, it was now possible to ascend the mountain by two successive rope tows running about 15 mph. Few women or children made it to the top, and no one ever claimed to make it without the tow gripper which was carried around each skiers’ waist.”
Mother and daughter on the tow rope

Mother and daughter on the tow rope

The improved facilities began to attract new skiers, and soon the tows could not keep up with the crowds. The increasing income provided for new lift development, and for the next 25 years the expanding facilities seemed to just barely keep up with demand. Many of the skiers dreamed of a T-bar or Poma lift to replace the rope tows, but there was considerable controversy over purchase of such a lift in 61-62, a trial ballot among members in 1961 barely passing 116 to 112. After more investigation and a compromise allowing mid-station unloading for beginners, the Club raised money in 1962 by selling ten-year season passes, and a 3300′ long Hall T-bar was bought for $60,000 to ascend 1100′ to the top of east Pajarito Mountain. Installation of a chairlift, more expensive, was considered to be too risky financially, and even the T-bar cost was questioned by some who felt that only rope tows could be afforded. Club members surveyed for a power line that summer and placed the poles to bring electricity for the lift motor, built a new lodge, and got the lift installed in time for opening day, 1 December, 1962.
Lone Spruce

Club membership continued to grow at a rate of 16%/yr, and three years later a new lift east of the T-bar was being considered. A bulldozer was bought for packing (“a bad idea”), and when the Los Alamos community land was sold by the AEC, the club bought 292 acres for its use, then another 108 acres. Lines were sometimes long at the T-bar by now, and a chairlift was installed on Spruce run in the summer of 1969. This time there was less controversy, although a few favored a T-bar, because a chairlift might attract “outsiders”, who were perceived to significantly lengthen the liftlines. Ten-year bonds were sold to club members this time with 8.5% interest to finance the $140,000 project. Slopes were being cut at the rate of more than one per year by a large cutting crew under the guidance of Thorn and newer members like Harry Flaugh, Ron Strong, and Jim Hedstrom. The lodge, built in 61-62 for a much smaller membership, was woefully overcrowded on busy days, and many plans were laid to expand it, but the liftline problem dominated thinking.