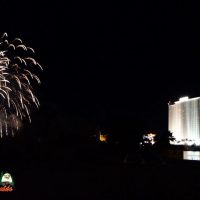 Bullhead City is a city located on the Colorado River in Mohave County, Arizona, United States, roughly 90 miles south of Las Vegas, Nevada, and directly across the Colorado River from Laughlin, Nevada, whose casinos and ancillary services supply much of the employment for Bullhead City. Bullhead City is located on the southern border of Lake Mohave. According to the 2010 census, the population of the city is 39,540. The nearby communities of Laughlin, Needles, California, Fort Mohave and Mohave Valley bring the Bullhead area’s total population to about 100,000, making it the largest micropolitan area in Mohave County.

Laughlin is an unincorporated town and census-designated place in Clark County, Nevada, United States. It is located on the Colorado River, directly across from the much larger Bullhead City, Arizona. Laughlin lies 90 miles south of Las Vegas, in the far southern tip of Nevada, and is known for its gaming and water recreation. As of the 2010 census, the population was 7,323. The nearby communities of Bullhead City, Arizona; Needles, California; Fort Mohave, Arizona; and Mohave Valley, Arizona, bring the area’s total population to about 100,000. Laughlin is also 286 miles northeast of Los Angeles.

Coursing more than a thousand miles from the Rockies to the Sea of Cortez, the mighty Colorado River provides irrigation, public water and hydroelectric power to parts of California, Nevada and Arizona. In Laughlin, the river also offers a wide spectrum of recreational activities. Enjoy boating, water skiing, jet skiing and fishing or a refreshing dip in the brisk water. Launch ramp facilities are plentiful along the river, as well as a multitude of watercraft rental services. For a more relaxed pace, take a leisurely, scenic ride or dinner cruise aboard paddlewheel steamship replicas and tour boats while listening to a narrated history of Laughlin and the surrounding area. The river can also be enjoyed by strolling along Laughlin’s River Walk. Extending from the Riverside Resort to the River Palms, visitors can take a relaxing walk along the river’s edge and see the many fish and waterfowl that flock to its shores.