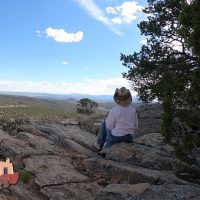 Lamy depot was built for the Atchison, Topeka and Santa Fe Railway (commonly known as the “Santa Fe”) and opened to passengers in 1909. It replaced a two-story wood frame structure erected in 1881. When the new passenger station opened, the original was converted into a freight depot and served this purpose into the 1940s.

The Santa Fe originally planned to run from Atchison, Kan., to Santa Fe, N.M., and then west to California. As the track building advanced into New Mexico, the civil engineers realized that the terrain around Santa Fe made this an impossible undertaking. The line was built through Lamy instead, and a spur line was built northward to Santa Fe. Amtrak passengers headed to the state capital still alight at Lamy where a shuttle transports them the remaining 18 miles.