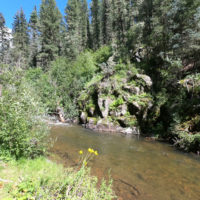 The Rio Pecos is perhaps the most central location for anglers seeking the greatest array of fishing opportunities.

The very best rainbow and brown trout fishing on the Rio Pecos is found between Terrero and Cowles. The section just above Terrero is best fished by beginning at the Terrero General Store (parking across the river along the road at Holy Ghost Campground) and fishing upstream. The upper canyon, also known as the Pecos Box, is accessed by hiking in from the parking area along the river just above Mora Creek Campground.

Cowles is the ideal jump-off location for day or expedition trips into the Rio Pecos. Beattys Flat, Pecos Baldy Lake, Stewart and Johnson Lakes, are all a day’s backpack from Cowles. Horsethief Meadow, up Trail 288, and much of Panchuela Creek, keep you close to great stream fishing on Cave and Horsethief Creeks.

Fishing in the Rio Pecos Wilderness is about small streams and alpine lakes. The growing season is short, so fish eat whenever they get the opportunity and whatever floats by that will fit in their mouths unless, of course, they see an angler looming above the stream.

In the backcountry, anglers should carry just one box of flies and most of them should float. Don’t worry about nymphs unless you fish the lakes, in which case a couple of small nymphs and Woolly Buggers will see you through. What’s most important is for your flies to fit in one box.

After spring run-off passes, say, during the latter part of June through early August (the former more likely today), March Browns are the hatch of the day. New Mexicans call these flies Red Quills. These mayflies come off in huge numbers and are the No. 1 mayfly on the Pecos. The nymph resembles a size 12 to 14 cream to natural Hare’s Ear. The adult fly is more grayish than red, a close approximation tied by substituting an Adams’ muskrat body with Hare’s Ear dubbing.

Rainbow trout are quite abundant in the Rio Pecos, but wild brown trout are perhaps the biggest draw.