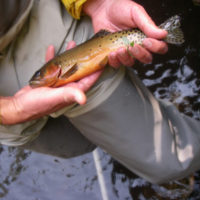 Since 2008, aggressive conservation efforts by the New Mexico Department of Game and Fish and it’s partners have enhanced or restored pure-strain native cutthroats in 127 streams that are open to public fishing. Rio Grande cutthroats now occupy about 700 miles of stream habitat.

After reviewing current scientific information about the cutthroat’s populations, genetic diversity and habitat conditions in its historic range in northern New Mexico and southern Colorado, the federal agency deemed that the fish is in no danger of extinction. The Rio Grande cutthroat was designated a candidate for listing in 2008, mostly because its habitat had dwindled to 11 percent of what it once was.

“Tuesday’s decision is a tribute to the hard work by the department and its public and private partners to conserve our state fish and keep it off the endangered species list,” said Paul Kienzle, chairman of the State Game Commission. “It also ensures recreational public fishing opportunities for Rio Grande cutthroat trout for years to come.”

The most impressive restoration effort has been the ongoing project to restore pure-strain native cutthroats to the Rio Costilla watershed, which consists of more than 150 miles of streams, 25 lakes and the Costilla Reservoir. More than 70 miles of streams have been restored and more than 33,000 native fish have been stocked in those waters since that project began in 2007. This year, the department plans to stock another six miles of restored waters.

All of the stocked Rio Grande cutthroats come from the department’s Seven Springs Hatchery in the Jemez Mountains, which raises nothing but genetically diverse, pure-strain fish for restoration and recreation.

“Keeping native trout in our state’s streams and lakes is extremely important to us, not only because it’s the department’s mandate to protect native species, but also because it’s our goal to provide anglers with opportunities to catch them,” said Bryan Bakevich, the department’s Rio Grande cutthroat trout biologist. “The Rio Grande cutthroat is found only in one place in the world – northern New Mexico and southern Colorado. We need to keep them around.”