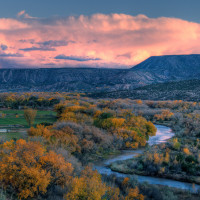 Northern pike were illegally stocked in Eagle Nest Lake. Recent surveys have indicated populations of the predatory fish have increased substantially and include four-year age classes with fish ranging in size from 12 to 30 inches. Northern pike have been known to destroy salmonid fisheries throughout North America. Proposed regulations would remove daily harvest and possession limits for pike, make it unlawful to release a live pike back into the lake, and remove northern pike from the waste-of-game fish protection.

Thursday’s meeting will be from 9 a.m. to 5 p.m. in Room C of the University of New Mexico Continuing Education Conference Center, 1634 University Blvd. NE, in Albuquerque. The full agenda, detailed agenda-item briefings and other information are available on the Department of Game and Fish website, www.wildlife.state.nm.us, or by calling (505) 476-8008. Details of proposed rules and opportunities to comment about them also are available on the website.

Other agenda items include:

The State Game Commission is composed of seven members who represent the state’s diverse interests in wildlife-associated recreation and conservation. Members are appointed by the governor and confirmed by the state Senate. Current members are Chairman Jim McClintic, Vice-chairman Thomas “Dick” Salopek, Tom Arvas, Bill Montoya, Scott Bidegain, Robert Hoffman and Robert Espinoza Sr.
If you are an individual with a disability who is in need of a reader, amplifier, qualified sign language interpreter, or any other form of auxiliary aid or service to attend or participate in the meeting, please contact Sonya Quintana, (505) 476-8030. Public documents, including the agenda and minutes, can be provided in various accessible forms.