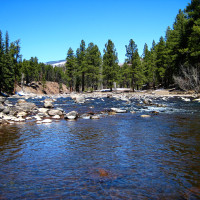 Animas River – The flow is 1,990 cfs. The river is muddy and still flowing fast with run-off.  No fishing report.
Chama River – Upper section flow is 142 cfs. and below El Vado, the flow is 728 cfs. Fishing is fair in the upper Chama with better reports coming from the public access south of Chama. Fish are being landed with woolly buggers and various bead-headed nymphs. Below El Vado, trout fishing is fair to good for rainbows up to 15″ and browns up to 19 inches. Panther Martins and Rapalas are working for browns and rainbows. San Juan River – Upper section – Catch and Release flow is 504 cfs. The river has been scoured and cleaned from the high flows and visibility is 3-4 feet. The fish have settled back into their usual feeding lanes and fishing is very good in all areas of the quality water section. Small midge patterns are the predominate producers in the mornings. Red Midge Larva, Krystal Flashes, Black Beauties and brown San Juan Worms are the go to flies. From middle flats and below, baetis patterns work well; try Chocolate Foam Wings and Fluff Baetis. Dry fly action is fair using Griffith Gnats or large hopper patterns. Lower section – Open waters, fishing is good with night crawlers, salmon eggs and the same flies as for the upper section. Lower section was stocked with 2,000 rainbow trout.
Abiquiu Lake– Fishing is slow for walleye with a few smaller sized fish being caught.
El Vado Lake – Fishing is slow due to a lot of recreational traffic on the water.
Heron Lake– Fishing is slow to fair for trout from the bank and trolling. Most success has been around boat ramps, near spillway and on the northwest side of the lake. Power Bait, worms and spinners tipped with corn are working well. Salmon fishing is good when trolling spinners tipped with corn in 20 to 25 feet of water.
Jackson Lake – Trout fishing is reported as fair to good using Power Bait and any spinner with gold blades.
Lake Farmington – Trout fishing is reported as fair to good using Power Bait, salmon eggs and worms.
Morgan Lake – No report.
Navajo Lake –  Fishing for smallmouth bass is very good when using soft plastics, jerk baits or crank baits. Crappie fishing is fair to good in Francis Canyon and LaJara. They are in the backs of the coves, use small jigs or minnows. Salmon are starting to bite when using Rapalas or Kokanee Killers in 25 ft. of water. Best fishing is from the dam to Francis Canyon.  No reports on pike or catfish.

Cimarron River – The flow below Eagle Nest Dam is 43 cfs and 42 cfs near Cimarron. Closed due to fire hazard.
Costilla Creek – The flow is 65 cfs near the town of Costilla and 74 cfs at the dam. Closed due to fire hazard.
Red River – Flows are 31 cfs near Questa and 53 cfs below the hatchery. All but the section of river in Red River is Closed due to fire hazard.
Rio Grande – Flows are 583 cfs near Cerro and 846 cfs below the Taos Junction Bridge.  Fishing has been slow. Not much for any hatches on the Rio right now.. Your best bet is fishing the pockets when nothing is going on hatch wise. Fish big bugs like golden stonefly nymphs, crane fly larvae, or woolly buggers. Pike hunt by feel, so large streamers that move water will get a pikes attention. No reports on bass.
Rio Hondo – The flow is 32 cfs and fishing is good for trout using dry/dropper rigs with stimulators on top and copper johns or caddis below. The upper Hondo is closed but fishing at the confluence is still allowed.
Rio Pueblo – Closed due to fire hazard.
Cabresto Lake – The lake is closed for repairs to the dam.
Charette Lakes – Fishing is very good for stocker-sized trout with many limits reported.  Power Bait and Panther Martins are most successful. Perch are good using small lures.
Clayton Lake – Fishing for trout is reported as good using chartreuse or rainbow Power Bait and worms.  Bass and walleye are slow.
Eagle Nest Lake – Fishing for trout is reported as good from shore with salmon-peach Power Bait and salmon eggs. Fly fishermen are having success with midge patterns and olive or black woolly buggers. Trolling is great for trout using light weight tackle. Perch are good to excellent off the bank when using worms.
Lake Alice and Lake Maloya– Sugarite Canyon State Park has been closed due to the Track Fire.
Maxwell Lakes – The water level is low at Lake No.13 and fishing is sporadic with an occasional trout landed. Best success is reported using Power Bait, worms and spinners.
Santa Cruz Lake – No report.
Shuree Ponds – Closed due to fire hazard.
Springer Lakes – Fishing is reported as good for pike up to 42 inches with large Mepps spinners, cut bait and minnows. Largemouth bass are slow using spinners Water levels are dropping due to irrigation so conditions are changing daily.

West-Central, including the Jemez Mountains

Jemez River, East Fork, Guadalupe and San Antonio – Flow on the Jemez River is 8.5 cfs. Closed due to fire hazard.
Metro Drainages Stocking has ended for the season and trout fishing is reported as slow.
Bluewater Lake – Fishing is fair for trout with Power Bait being your best bet. The tiger muskies are fishing slow. Catfish are reported as fair with stink bait and chicken liver.
Cochiti Lake – Closed due to fire hazard. Please stay away from the area! Cochiti lake is the base of operations for the type one incident management team who is fighting the southern part of the fire.
Fenton Lake – Closed due to fire hazard.
Tingley Beach – This is the best time of year to fish at Tingley – catfish, trout and bluegill are biting and all baits are catching them!  Reports are fair from fly-rod anglers at the South/Catch and Release Pond. Stocked with 1,450 channel catfish last week.

East–Central, including the Pecos River

Coyote Creek – Closed due to fire hazard.
Pecos River – The flow near Pecos is 31 cfs. Closed due to fire hazard.
Conchas Lake – No report this week.
Morphy Lake – Closed due to fire hazard.
Santa Rosa Lake – Same as last week, largemouth bass were active around brush and large structures, try flipping tubes and jigs into them. Walleye are reported as good, although many are small. Bass are everywhere; try downsized crank baits and soft plastics around the points and on the flats. Crappie, up to 1.4 pounds, are hitting just about everything presented to them. Best bites came from tubes in the main creek channel off the bluffs. Catfish are very active as well using minnows and cut bait.
Storrie Lake – Fishing is good for trout using Power Bait, with many limits taken.  Catfish are fair to good with chicken liver.
Sumner Lake – Fishing is good for walleye along the Eastern Bluffs and near the mouth of the Alamogordo Arm trolling white and fire tiger crank baits and rattle-traps 8-12 ft. Fair for largemouth and smallmouth casting white crank baits along coves and structure 2-5 ft. Good for white bass using a variety of plastic worms, spoons and crank baits. Fair for channel cat below the dam on the Pecos River, also on the West shoreline south of the Main boat ramp using chicken liver. No reports on crappie.
Ute Lake – Fishing is good to excellent. Walleye are fishing good to excellent trolling crank baits over brush in 10-15 feet of water or try crawlers in 17-22 feet of water. White Bass are fishing fair. Large and Small mouth bass are reported as excellent and are hitting most anything thrown at them.  For the smallies, try the top water early in the mornings and Senkos whacky rigged later in the day. The largemouth are on their beds in 4-6 feet of water. Crappie are fishing good up the Canadian around rock and brush and in the main lake coves using minnows in 2-4 feet of water. Catfish are good in 2-8 feet of water with chicken liver or stink bait. Fish near the reeds and brush for best results.

Gila River – The flow is 22 cfs and there is no fishing report for the West, East and Middle forks.
Rio Grande – The flow is 1,940 cfs below Elephant Butte Dam. Catfish are fair using worms, liver or stink bait.
Bill Evans Lake: Winter stocking for trout has ended for the year and will resume late next fall.  No

Black River – Flow is 5.5 cfs. No report.
Bonito Creek – Closed due to fire hazard.
Rio Ruidoso – Flow is 0.39 cfs. Water levels are very, very low and fishing is reported as slow. The only fishing available is through town due to forest closure.
Bonito Lake – Closed due to fire hazard.
Bottomless Lakes: Winter stocking is over for the year. Stocking will resume in late fall.
Brantley Reservoir – There has been light pressure and no current report.  A mandatory catch and release is in place at Brantley Lake because pesticides have been found in the fish. Do not keep or eat them.
Grindstone Reservoir – Fishing is reported as fair for trout using Pistol Pete’s in the evenings and Power Bait and worms during the day. The lake was stoked with 4,825 triploid rainbow trout.
Lake Van: The lake was stocked with 623 triploid rainbow trout. No report.