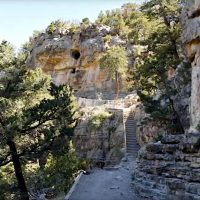 Discovered in the 1930’s, by Frank Hibben, Sandia Cave is an easy drive from Albuquerque. Follow Highway 165 through Placitas, New mexico, all the way to its end. Continue three miles down the unimproved dirt road till you reach the parking area, and a well marked half mile uphill trail to the cave. At the Sandia Man Cave you have to climb circular stairs up the cliff face to see inside the cave. The site is a National Historical Landmark where the oldest inhabitants of America once resided, 10,000 to 11,000 years ago.

The cave was discovered in 1936 by a University of New Mexico anthropology student. From 1937-1941 UNM excavated it. Found in the cave were stone arrow and lance points, basket scraps, bits of woven yucca moccasins, and skeletal remains of Ice Age animals such as the mastodon. No human remains were discovered.

Folsom people(Sandia Man), who thrived in the Southwest perhaps 10,000 years ago and hunted bison with a spear point that had a unique “fluted” shape.