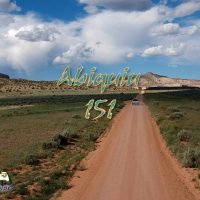 Abiquiù was the one of the homes of artist Georgia O’Keeffe from 1929 until 1984. The Georgia O’Keeffe Home and Studio is in Abiquiú and she also owned property at the nearby Ghost Ranch. Many of her paintings depict scenes near Abiquiú.

Abiquiú was first settled in 1742 by 24 Tewa Pueblo families led by a Roman Catholic priest, Francisco Delgado. The Tewa returned to New Mexico after a lengthy residence among the Hopi people in what would become Arizona. Their settlement in Abiquiú was part of the strategy by New Mexico to defend its frontiers against marauding American Indians such as the Apache and Comanche.